Spinal discs are the rubbery cushions located between each vertebral bone in the spine. Each disc is made up of a tough outer fibrous exterior called the annulus fibrosus, and an inner jelly-like substance called the nucleus pulposus. For a variety of reasons, the outer portion of the disc can tear or rupture, releasing the inner central portion, which may leak out into the surrounding area. Along with nucleus pulposus, there may be a release of inflammatory chemical mediators, which may cause severe pain with or without nerve compression. The resulting bulge in the disc is called a spinal disc herniation, and may alternately be referred to as a herniated disc, prolapsed disc, ruptured disc, or slipped disc.

Spinal disc herniations are often the result of trauma, injury, the aging process, repetitive wear and tear, or may be idiopathic (of unknown cause). Both the disc herniation and the release of chemical mediators can irritate or impinge upon the nearby nerves, resulting in symptoms of pain, numbness, tingling, aching, or weakness that radiates to the arm or leg the nerve goes to. Some symptoms such as muscular weakness, paresthesia (pins and needles sensation), or paralysis may affect the reflexes. If the lower portion of the back is affected, called the lumbar region, the patient may experience nerve pain called sciatica because the pressure affects the sciatic nerve.

Diagnosing spinal disc herniations most often is initiated by a physical exam with a pain doctor, who may ask a series of questions or perform a neurological exam to evaluate touch sensation, reflexes, muscle strength, and range of motion. Describing the location and type of pain experienced may help the doctor to locate the area that is injured and rule out other causes for the symptoms. Imaging exams such as x-rays, CT scans, MRIs or electromyograms and nerve conduction studies may follow to determine the precise source of the pain and assist the doctor in creating a treatment plan.

Treatments for disc herniation vary greatly, depending upon the location and severity of the protrusion and the patient. Minor herniations may heal within a few weeks, and only require conservative treatments. The vast majority of people with a ruptured disc will find relief with an exercise plan and pain medications. These medications may include non-steriodal anti-inflammatories, acetaminophen, narcotics, and muscle relaxants. Increasingly, antidepressants and anticonvulsants are becoming the primary medications of choice because they tend to have milder side effects than narcotics. Another treatment of choice is corticosteroid injections, also called epidural steroid injections, which offer relief by reducing inflammation when injected directly at the site of the affected nerves. Physical therapy or other exercise plans may be recommended alone or in conjunction with other treatments. Surgery is generally considered a last resort after more conservative methods have failed, or in cases where there is a significant neurological impairment. Usually, only the herniated portion of the disc needs to be removed to relieve nerve compression. In other cases, the entire disc must be removed. It may either be replaced by an artificial disc, or the remaining vertebrae can be fused together permanently. 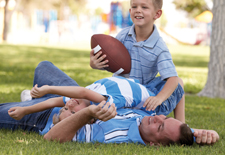